Global equity markets have surged since late March. Against a backdrop of improving economic outcomes and unprecedented levels of policy support, the US S&P500 Index has rallied almost 46%, whilst the markets in New Zealand and Australia are up 38% and 31% respectively. Market cycles are always definable by specific factors and influences, but the current experience for investors has a number of particularly unique features. There are none less so than the backdrop of the novel coronavirus, but what is also fascinating about the environment today is the dominance of “growth” stocks relative to “value” stocks and the very narrow set of shares that are ultimately driving overall market returns.

Traditionally “growth” stocks are considered as those companies that can grow their earnings at a superior rate due to factors which are specific to their own enterprises and the sectors in which they operate. Technology companies are a good example of this. Profits earned, are typically invested back into their operations and shareholder dividends are not considered a priority. Value stocks on the other hand are those investments where the opportunity to generate a return is a function of the share price trading below fair value. Often these businesses enjoy more established operations and will pay above-market dividends. But their fortunes are often very sensitive to the state of the underlying economy. Currently the extent and the duration of outperformance that we are seeing around the world by growth stocks, over value, is larger than at any other time in history. This includes the late 1990’s where “dot-com” growth companies enjoyed massive outperformance over a number of years. This was until the early 2000 when investors remembered that valuations and profits ultimately do matter!

The share index which had the greatest representation of these dot-com companies during this period was the US Nasdaq. After rallying over 500% in the 5-years preceding its peak in March 2000, this index then crashed by almost 80% in the following 18-months! While there were a number of reasons why this happened when it did, including the Federal Reserve lifting interest rates, the critical lesson from this experience was that share prices must bear some relationship to the underlying value of the companies they represent. This is a lesson that should be remembered always but particularly at times when we see persistent outperformance from one set of stocks over another. History tells us that these are imbalances are unsustainable and that caution is warranted when they occur. Ultimately a company is worth the value of the free cash flow that it can generate for shareholders. For long periods this relationship may not hold but eventually value always wins out.

The environment today does feel different to what we saw in the late 1990’s. In those days there were literally thousands of dot-com businesses trading with huge valuations but with no earnings. The technology (growth) businesses of today do appear to be different, because in many cases there are actual profits being earned. But similar to where we were 20-years ago many of these stocks today are trading at extraordinarily expensive levels. With interest rates at almost zero percent and the world flush with central bank liquidity, many investors are currently behaving as if the risk of capital loss has disappeared and that some of these growth companies are essentially invincible. Local evidence of this can be found in the huge lift in demand for the retail trading platforms Sharesies and Hatch. During the COVID-lockdown, 75,000 New Zealand investors joined Sharesies and the number of members at Hatch, which enables investment in US stocks, doubled. The companies dominating these small investors’ portfolios are Tesla, Amazon, Microsoft and Amazon. For example, NZ investors using Hatch have put over $50m into Tesla alone. This experience is common around the world with US trading app, Robinhood, also reporting that the number of their users that own these shares have skyrocketed. These investors tend to be unsophisticated and are unfamiliar with fundamental valuations, instead just buying a “growth story”.

The stories surrounding these stocks are exciting, but with such dramatic levels of buying from both retail and institutional investors (often passive) the multiples being paid are getting larger and larger. Tesla, for example, today has a market capitalization of more than $260bn. It is now larger than the combined valuations afforded Ford ($25b), GM ($35b) and even Toyota ($191b). This, despite the fact that their sales are tiny in comparison to the other three. In 2019 Tesla delivered 367,500 electric vehicles (50% up on the previous year) whilst Toyota produces 10 million vehicles annually. Amazon has a P/E of 150 and is regarded as a guaranteed winner, regardless of the state of the economic climate. The list can be easily extended. The high levels of liquidity in these large-cap growth stocks also contributes to the level of participation that we are seeing and the speculation.

In New Zealand and Australia, we have also seen evidence of this thematic. Fisher and Paykel Healthcare is absolutely one of our best businesses. Operating in the very topical area of hospital ventilation as well as sleep apnoea, its share price has rallied 120% in the past 12-months. The challenge for investors today though is its valuation. Based on consensus earnings estimates for the financial year ended March 2021, Fisher and Paykel is trading on a price-to-earnings multiple of 56-times. What this means is that if its after-tax profit did not grow from the levels achieved next year, it would take 56-years for investors to recoup their investment. We actually expect solid growth from this company over the medium-term, but such a valuation inevitably creates a worrying level of downside risk in the event that this growth does not eventuate or disappoints. A similar situation is evident in Australia with one of their largest listed companies, Afterpay. Having rallied over 180% over the past year, this payments business is now trading on a price-to-earnings multiple, for FY22, of 162-times! Again, this is a good business, but their management will need to execute very well to meet the expectations built into this price. 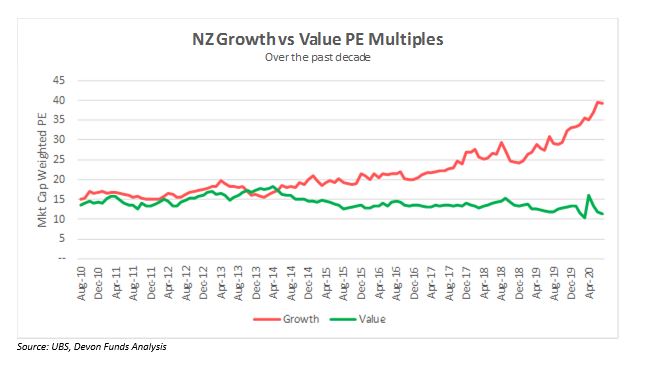 A consequence of the strong demand being seen for these types of stocks has been a significant increase in the relevance that a small number of shares are having on the overall returns across global markets. In probably the world’s most important stock exchange, the US S&P500, five companies (Apple, Microsoft, Amazon, Google and Facebook) now represent 25% of the index’s market capitalisation. These are exceptional companies and they are succeeding across the board as our lives develop around technology, but such a level of concentration inevitably creates risk. In New Zealand we have a similar phenomenon with Fisher and Paykel Healthcare and a2Milk accounting for 30% of our major index, the NZX50.

With an increase in concentration across the constituents of the major equity markets, we are also seeing an unprecedented level of influence from a small number of stocks on the aggregate performance of our stock exchanges. A great example of this is the NZX50. As at the end of July this year, our primary index had a year-to-date return of +2.1%. On the face of it, many commentators could be forgiven for assuming that this implied most stocks were trading at about the level that they were at the end of 2019. This was not the case. As at July 31, the average return for benchmark members was -5.5%! The reason for the apparent inconsistency, is that Fisher and Paykel was up 63% and a2Milk had rallied 39%. As an investor, the decision made to either own these stocks, or not, was the overwhelming determinant of how you had performed. In Australia (ASX 300 Index) we have seen a similar dynamic with the 20 biggest contributors to the current rally so far accounting for 54% of the gains.

As it stands today, we believe that it is more likely than not that equities will continue to push higher. The combination of interest rate settings and a foreseeable recovery in global corporate earnings have, and will continue to, set a productive platform. History suggests that it will take an increase in interest rates, either through central banks tightening conditions or inflation rearing its head, for the market recovery to end. This does not appear imminent. What investors do need to be careful of though, is getting caught up in the upward momentum of prices. Investing capital into stocks without clear regard for their fundamental value is dangerous. As we saw in the early 2000’s, when the music stops this strategy can result in a substantial decline in capital values. As we look forward into the next few years the economic climate should be vastly improved from where we are today. This environment will lend itself favourably to strategies which recognise value.