Stock Takes: Why NZ's sharemarket is falling behind the rest of the world

2nd July 2021: The New Zealand sharemarket could be headed for its toughest year in some time if it continues to track as it has done for the last six months.

As of June 30 the benchmark NZX50 index was down 3.34 per cent for the year to date, in stark contrast to other global markets.

Mark Lister, head of private wealth research at Craigs Investment Partners, said our market had been weak in the face of pretty much every other international market.

"Looking at that you would almost say the New Zealand economy must be in a bit of a difficult spot and that's not the case at all because our economy is going really well.

"It's just that the nature of our market and the types of companies on our market haven't lent themselves to the global theme of higher inflation, higher interest rates and economic recovery."

With talk of inflation running high investors have sought out growth stocks rather than those paying dividends.

"All of our yield-sensitive stocks have dragged us down and a couple of stock-specific ones like A2." 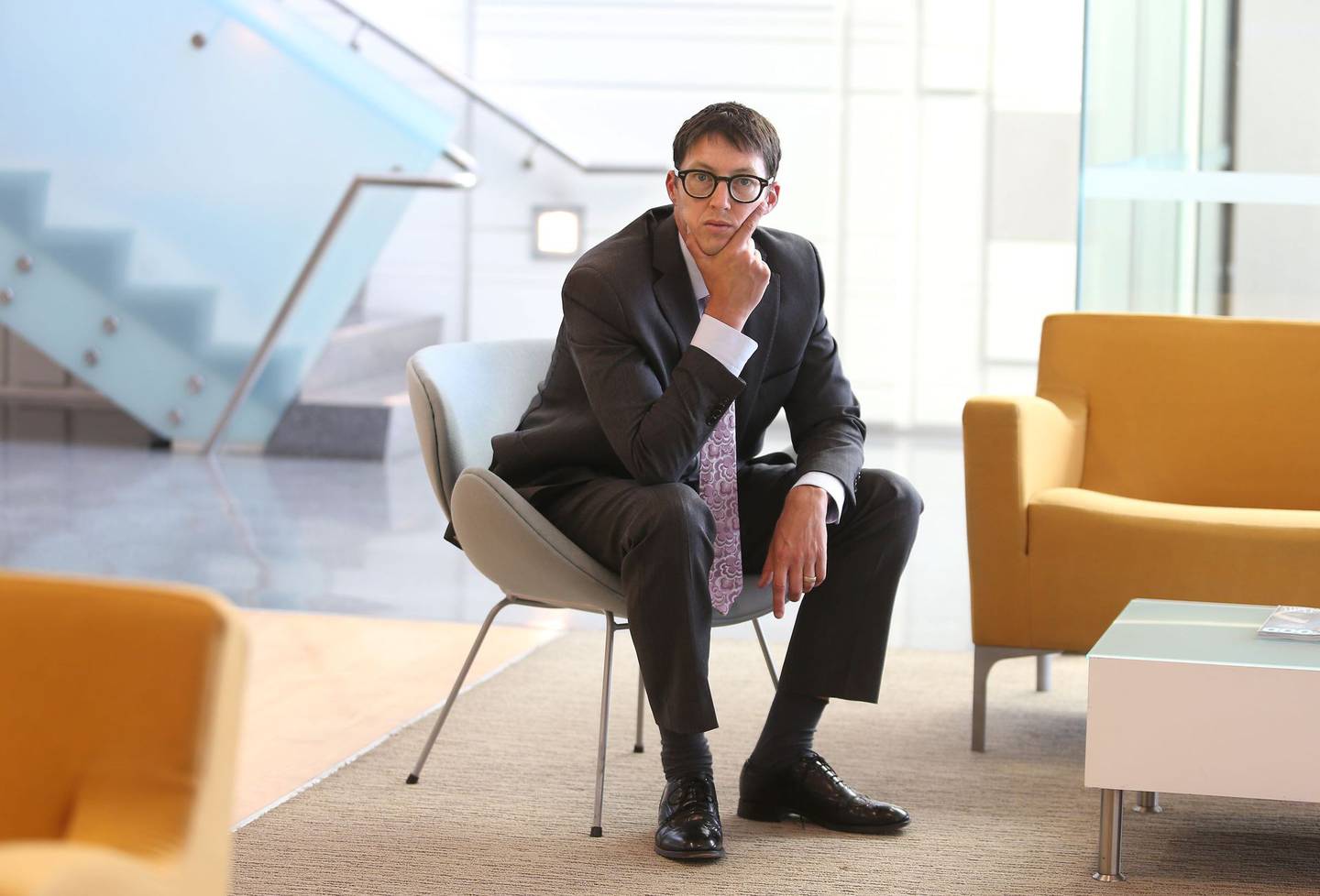 Lister said even excluding A2 Milk from the index he estimated it was likely be flat or slightly down.

The Covid recovery has driven higher investment into banks and insurers as they bounce back with the economic recovery expected to result in lower loan defaults and lower deaths with fewer life insurance claims.

The New Zealand market has very little exposure to these sectors.

It has also meant that companies like New Zealand's largest listed company Fisher & Paykel Healthcare which had a huge run-up last year has not performed as well, with fewer hospitalisations from Covid dampening demand for its products.

Last year the NZX50 surprised on the upside rising 13.5 per cent over the year after its major market meltdown in March and April and was one of the best performing sharemarkets globally but that could turn out to be the opposite this year.

Despite the progress so far Lister says he is upbeat on the local economy and the local sharemarket.

"A bit of weakness or us lagging is not a bad thing because I think for firms like ourselves we are net buyers ... you actually want these periods where the market either goes sideways or is a bit soft in places because then you can take those opportunities to buy a few stocks at reasonable prices. I see that as a silver lining."

One of the companies driving the poor performance of the index overall is A2 Milk. Its shares are down nearly 47 per cent year to date, marking it as the worst performer in the NZX50 so far this year.

Tama Willis, portfolio manager at Devon Funds Management said A2 would be a big focus for analysts in the August reporting season.

"That will be watched very closely to see how its first half is tracking whether the price rise in the daigou channel has stimulated some increased demand. That is probably the one business where there is the most uncertainty on exactly where they are tracking. It is very difficult to work that out at this point."

Willis said the lack of visibility and ability to forecast exactly what was happening had led to elevated uncertainty for the stock.

With its fortunes closely tied to A2 Milk, Synlait shares have been the second-worst performer, down a touch over 30 per cent. 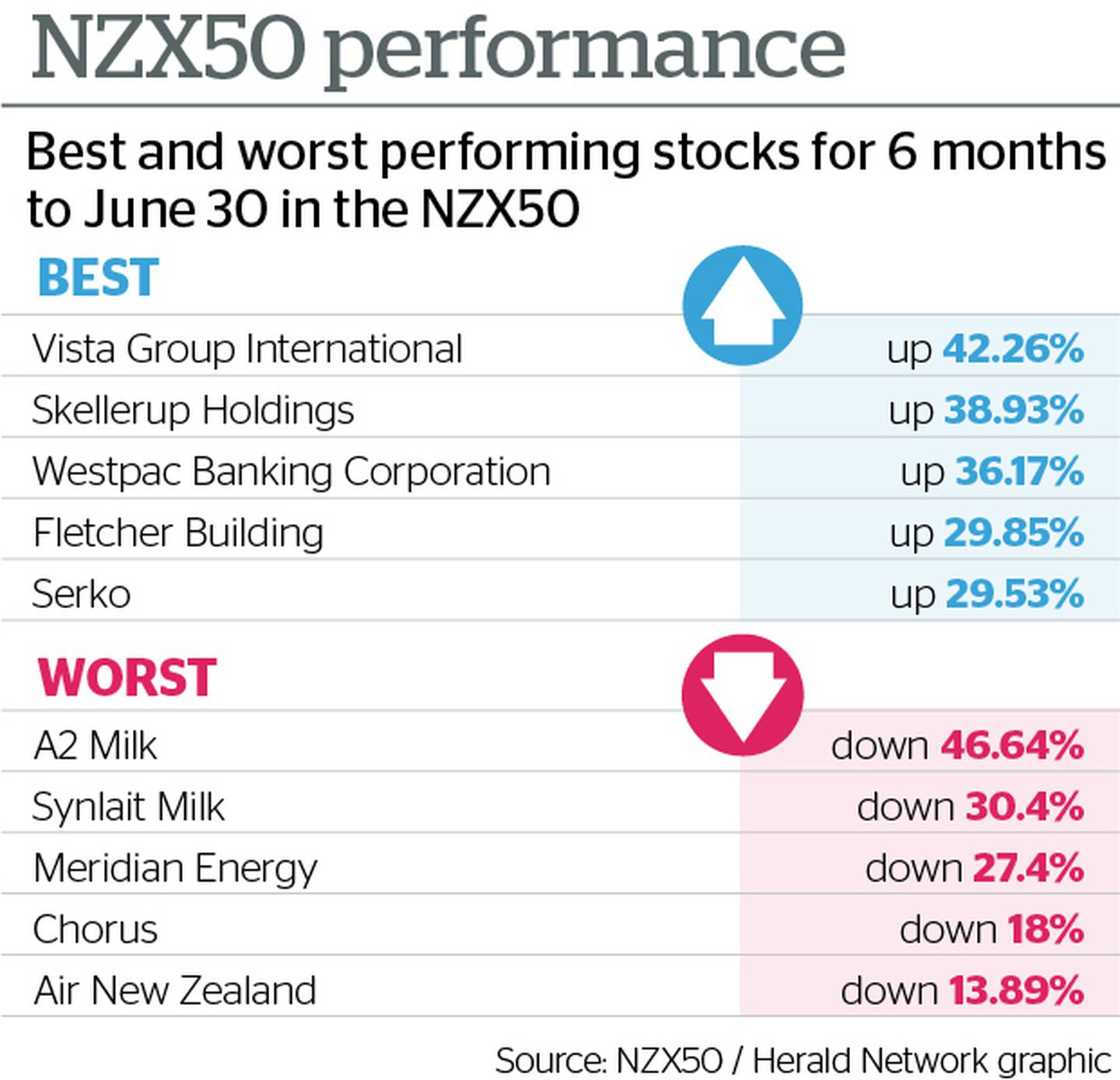 Meanwhile, Meridian shares were driven higher at the start of this year with the US announcing a big push into clean energy driving major global investment manager BlackRock to snap up more shares in the company.

Its stake got as high as 7 per cent before a reweighting of the S&P Dow Jones Global Clean Index saw BlackRock drop its stake to just 3.33 per cent in April.

Air New Zealand rounds out the top five worst performers with no surprise given the ongoing disruptions to air travel, and expectations the company will undertake a capital raise by September 30.

Cinema software company Vista International has topped the performance table with its share price rising 42 per cent this year as it has benefited from the reopening of cinema chains around the world.

Willis said around 83 per cent of cinemas were now open globally.

"When you look at the majority of US cinemas are now open, UK cinemas, a good part of Europe. China has been fully open for some time. India is more sporadic."

That compares to last year it got down to as low as 30 per cent globally.

"It is quite a marked improvement. So that is encouraging."

Willis said Vista's cash burn was also now much lower than it had expected. The company forecast its cash burn to be $3-4m a month but last week told the market it was now likely to be less than $2m a month.

"You have just seen Fast and Furious launch which had a very strong opening weekend, the strongest since the pandemic. It did US$70m in the US in the first weekend and that follows a strong outcome in the rest of the world."

Willis said the studios had been deferring the release of content which meant there was a backlog of content to get through over the next 18 months including the latest James Bond and Wonder Woman movies. 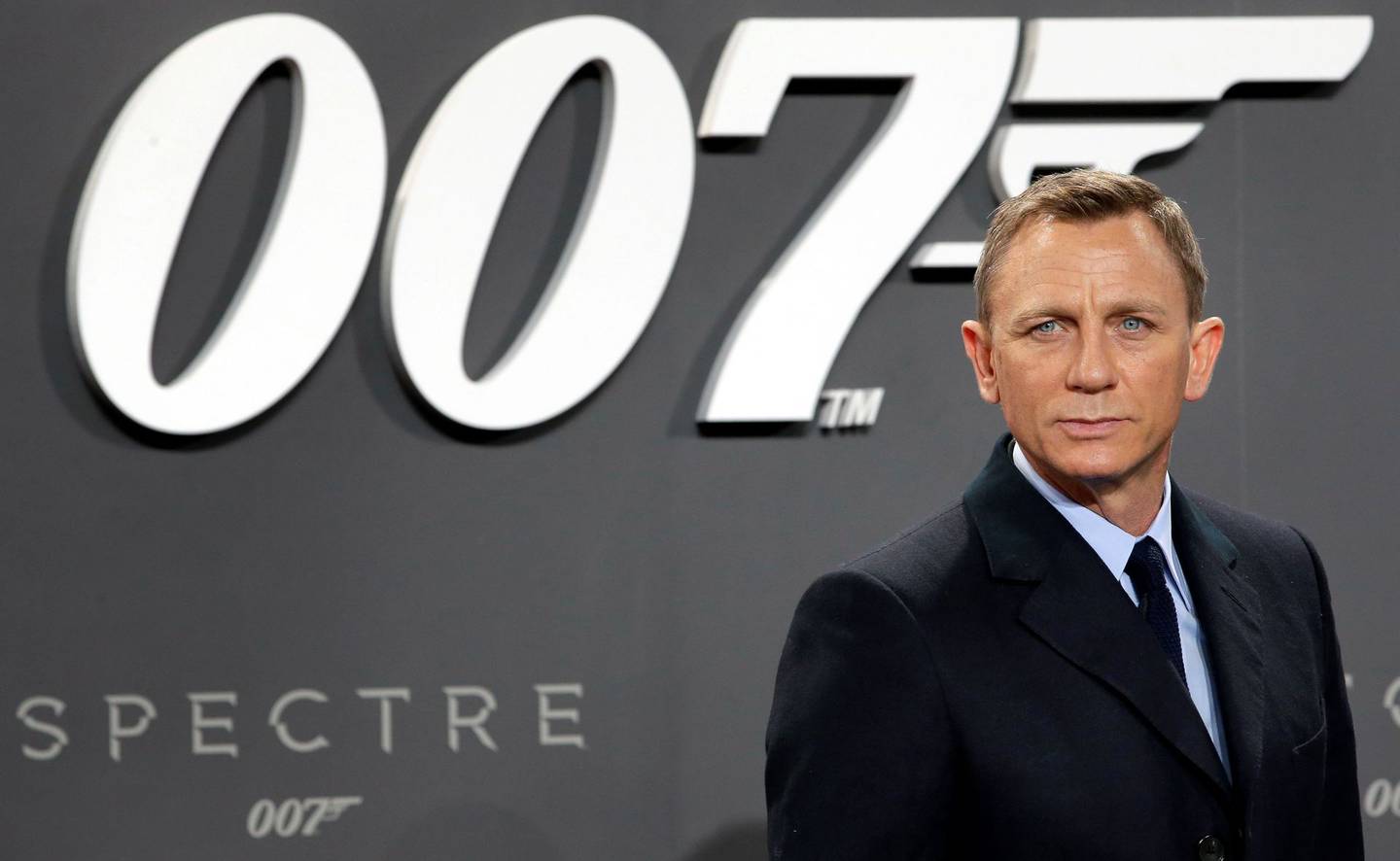 That is likely to benefit Vista's movie marketing arm Movio.

Willis said the company had almost $50m in net cash in bank at end of 2020 and could end up with the same amount of cash at the end of this year which put it in a strong financial position.

While Covid outbreaks remain a risk to the stock the high vaccination rates in the UK and the US mean cinemas are more likely to remain open in those major box office markets.

Research by CAFCA - the Campaign Against Foreign Control of Aotearoa - shows foreign ownership of the New Zealand share market hit its highest level since 2006 in 2020.

According to its research foreign owners controlled 39.3 per cent of the shares listed on the NZX as of December - a 1.6 percentage point increase on the prior year.

CAFCA noted this was largely attributable to Fisher & Paykel Healthcare which accounted for 8 per cent of the entire offshore market ownership - almost double the previous year.

Foreign ownership of the New Zealand sharemarket has grown over time. Just 5 per cent was owned by offshore investors in 1986 rising to 19 per cent by 1989.

Research by Forsyth Barr shows ownership by Australian investors in the NZX50 companies has been trending down in recent years.

Analysts Liam Donnelly, Matthew Leach and Arron Ibbotson said the recent downward trend in Australian ownership appeared to be largely the result of A2 Milk's share price decline not due to a reallocation away from New Zealand equities.

"Interestingly the month of May saw Australian ownership of [A2 Milk] increase by 1.7 per cent. Ex-A2 Milk the ownership level of the NZX50 is back to the level it was 12 months ago, which stands in contrast to A2 Milk-inclusive ownership which has retraced to January 2016 levels."

Forbarr's research shows A2 Milk still has the highest level of Australian ownership of all NZX50 stocks at 50.6 per cent, followed by SkyCity at 45.7 per cent, Chorus at 43.4 per cent and Fletcher Building at 40.5 per cent as of May.

Global From Day 1 target New Zealand business to business technology companies that are going global and its previous investments include Shuttlerock, Spotlight Reporting, StretchSense and UBCO.

This investment will be Elevate's fifth and largest allocation taking its total combined allocations to $139m.

Elevate was set up by the Government to invest in early-stage businesses with a $300m fund of funds programme designed to help plug a capital gap for high growth businesses looking to raise series A and B funding.

Fisher Funds has appointed Ashley Gardyne its new chief investment officer following the decision by Frank Jasper to step down from the role. 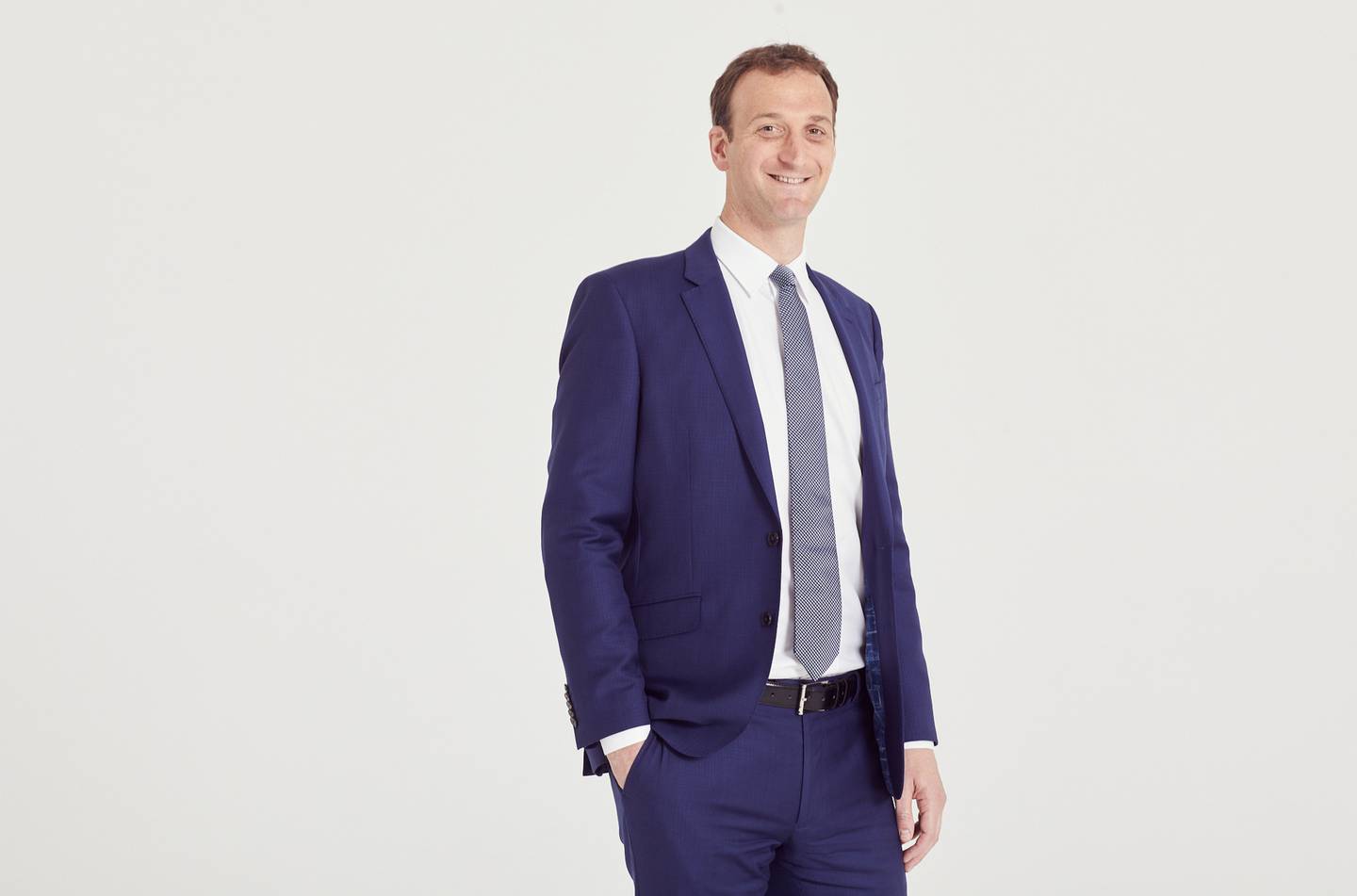 Gardyne is currently senior portfolio manager international equities at Fisher Funds and has been part of the team for over eight years.

Gardyne will continue as senior portfolio manager of Marlin Global Ltd, a New Zealand based listed investment company as well as doing the CIO role.

Jasper had been CIO for the last four years and was with Fisher Funds for 16 years.